Last night I went to the first of four Science Unleashed workshops with Chris Clay and Ally Bull. I was quite excited because since I met him at the MindLab I've enjoyed everything that Chris has shared with me PLUS I have a science background and enjoy doing fun sciencey stuff with children.

After getting lost not once, not twice, but three times on my way there, I finally found the room at AUT North Shore and settled in. We had a brief introduction but it was straight into a fun, exploratory, playing activity. We were given rocket powder (not actually rocket powder), and rocket liquid fuel (also, not actually rocket liquid fuel, as well as a variety of other materials to make our rockets. Chris did a "shoddy demonstration" (his words, not mine, and on purpose) to give us some basic idea of what we needed to do, with the simple task of seeing if we could make our rocket go high.
All of the partnerships worked, trying different mixtures of the liquid (there were 3), different shapes for our fuel delivery system, as well as different amounts of liquid and powder. When we first started, the rockets didn't work really well (our first one didn't even explode!). But over time, it was clear that more and more of everyone's rockets were getting higher. It was at this point that Chris stopped us and brought us inside to conference. He had us discuss what we found out. Could we make any claims that were supported by evidence. We wrote our claims down and discussed what had happened. There was some consensus on what was certain (one of the fuels was useless) but there was also some disagreement. 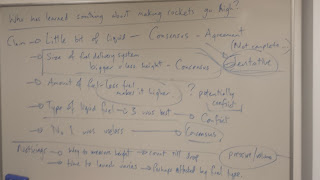 Then we went back outside and had another go at it. This time a few groups spoke with each other and discussed which variables we would test. Angela and I decided on changing the amount of liquid. We found that a little bit of liquid worked better than a lot. Have a look at one of our tests. Unfortunately it shot up so quickly we couldn't see the whole thing. But you can tell that there was a lot of upward force propelling it.

The last step of our investigation was another debrief back in the classroom. We discussed ways in which we could improve our investigation. A few of us thought that it would be better if we decided as a group which variables we would test. Others discussed how we would make our measurements more accurate and what things we should measure (we thought that timing hang time would help determine which rockets when highest). 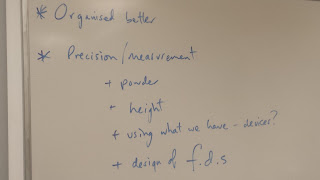 So what was the point of this? Well, there were a lot. The first one is that science and other fun, hands-on activities can be done on the cheap. Not all schools can afford lots of equipment, and Chris even said early on that having less materials and resources can actually be a good thing as it forces you to be innovative.

The whole process was one that was meant to promote the Nature of Science (NoS). Compared to a 'typical' science lesson, one like what we did pretty much gives opportunities to develop all four strands of NoS. For Understanding About Science, learners are given the chance to make their own explanations and understand how science works. They are clearly learning what Investigating in Science means because they are carrying out their own investigations. The whole time, learners are Communicating with their partners and with each other. The conferencing was a fantastic way of communicating this idea. There are also loads of possibilities to share their learning with others or digitally. Every single one of us was participating in actual science and we were all contributing the the scientific community that we had created amongst ourselves.

Though this is not the first time I've participated in Science PD that was similar to this, I have continued to get loads of ideas. As Chris said, he's not about giving us a recipe for a perfect science lesson. But he did give us some great ideas to provoke scientific thinking and investigating. And that's before you consider the inspiration that this night has provided me. I'm looking forward to next week!