One of the challenges (or opportunities) that exists when teaching and working in a large space with many learners and many educators is that sometimes the children don't get to know all the other children. In a massive group, surprisingly enough, the same children tend to work with each other when given the choice.

As learning coaches, when we saw this we weren't too sure that this was the best for our learners. We wanted them to develop social skills that would enable them to work with anyone. We also wanted our learners to be able to reflect on their work, with someone who was a safe friend (or even a critical friend).

So we came up with the idea of having learning buddies. The idea was that whenever we had the whole group of them together, they would be sitting with their buddy. If we asked them to discuss anything, it would be with this buddy. So we made a list, which we started rotating every week and thought it would go smoothly. I guess by now I should know that nothing every goes smoothly. Some of our learners were doing as we asked and trying to have conversations with the correct buddy. But others were bringing their buddy with them and sitting next to their friend and talking to their friend. There was a lot of frustration.

Our initial thought was to put a forced seating plan in place so that they couldn't sit by their buddy. But cooler heads prevailed and we took advantage of a day when half of the learners were out testing to run a mini design thinking workshop. We identified the problem to the learners and we examined why this particular response was occurring.

The overall theme to the responses was that they didn't know their buddy and that they were more comfortable with their friends. Some of the buddies were goofing off so they wanted to make sure they talked to someone. We identified that the main problem was that they didn't have enough time to get to know there buddies. So we framed our How Might We question as:

How might we get to know our learning buddies better so that we talk to them and not our friends? (it may not have been exactly this wording).

From there were had the children do a crazy eights activity to come up with some possible solutions. Each child picked their favourite and pitched it to a partner. Each pair chose their favourite in that group and then pitched it to another pair. This continued until we had two ideas facing off against each other.

To be honest, all of the ideas were pretty good, but I liked both of the final two the best. The first was to have the buddies interview each other and the second was to have the play a game together. We combined both and changed the turnover rate between buddies. So every two weeks when they got a new buddy, there was a list of questions to ask each other AND we gave them a task to complete with the buddy. Those tasks were things such as: make a secret handshake, make something out of 10 lego pieces or design a logo for you and your buddy. 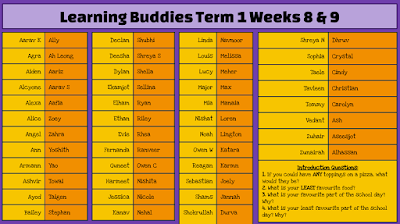 Things went a lot more smoothly after this. I can't say whether or not that was due to the fact that we did some interventions or the fact that the children were actually heard and empathized with (which is a big part of a design thinking approach). Either way, as the term went on, we as learning coaches did notice some interesting interactions and a growing sense of community amongst the learners. This effort was only a small part of our larger efforts but the idea itself AND the trouble shooting we did with the learners clearly has had some impact on the way our habitat runs.
Posted by Michael D at 6:46 PM