My First Term as a STEAM Specialist @MatuaNgaru

An astute reader of this blog would probably notice that I haven't written anything here for about half a year now. A reader who knows me personally would also know that despite that fact, much has been going on in my life. I'm the type of person who, when opportunity comes knocking, finds it quite difficult to say no. Maybe it's because I read too much into the movie Yes Man. I'm not sure.

Well, opportunity certainly has come knocking a lot for me in the last six months. I'm here today to tell you about one of those opportunities that I've seized: being a STEAM specialist educator at a new school, Matua Ngaru in Auckland. Perhaps my story can help you. Perhaps it will just be an interesting read. Either way, here's what I did, how it went, and what I learned.

For some context: Matua Ngaru is a school that first opened its doors to learners on February 7th, 2019. Since about late August 2018, I've been working for the school, doing various things to get ready. We knew it was going to be a lot of work, but boy, did it ever exceed our expectations in that regard! Our first term has pretty much seemed like a non-stop school day that lasted 10 weeks. There have been ups and there have been downs, but no matter how those balance out in the end, I can say this for certain: I learned a lot!

Up until this point, I had never really spent too much time teaching STEAM specifically - unless you count robotics and a few things I've done with Lego - so being told I'd see every Matua Ngaru learner once a week to do some STEAM stuff with them was quite a scary proposition (What if I'm no good at this thing I've been trying to do for the last several years? What if I can't make it work?). Luckily, I was given this task well in advance, so I had time to prepare and think about it. I had some help and, obviously, I also had all those previous conversations with people who HAD done this before. It's safe to say I came into this with TONS of ideas.

Our school is divided at the moment into two Kāinga: Wheke, for our Year 1-3 learners and Popoto, for our Year 4-8 learners. As a school we decided I'd see four groups from Wheke and 2 from Popoto each week. To make things simple, I decided to just make two lessons each week and repeat them. While we were planning everything, we hadn't yet met any of the learners and we did't know what skills or STEAM experience they would be bringing with them when they arrived on day 1. While this decision was not a total disaster, it was clear there needed to be some more differentiation after a few weeks. The difference between a Year 1 learner who has just started school and a Year 3 learner can be quite big, and having them do the same things after a while didn't seem that great of an idea. I made it work for the term, but now that we know the learners, we've grouped them differently - and have added another group for the older children so I can give them a bit more time. These groups have been determined by the maths groupings in their kāinga, so there will be less of a range of abilities and experience within the groups. 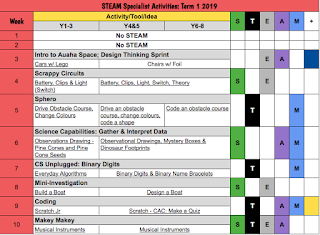 My plan for the term was to go through as many different STEAM related areas and ideas so that I could 1) get a good understanding of where every child was and 2) introduce a lot of things that they will need going forward if my long term plans are to be realized. This plan worked quite well on some weeks and on others I felt like I needed more time. The very idea of only seeing a group once a week for 40 minutes to an hour is troublesome when it comes to STEAM, so I also had the potential problem that if I started something that needed to be kept for a further week, it would be difficult to manage all the resources.

I tried to make sure I was covering as many of the STEAM areas as I could, as well as giving a good variety of activities to introduce certain ideas to the children. Overall, I think it was a good plan and that it went well. Almost every activity (even if I thought it wouldn't) was something that the majority of the children enjoyed. Not everything went as I had thought - there was definitely a skill gap for many of the children and most had never heard of things such as Sphero, Scratch or Makey Makey. 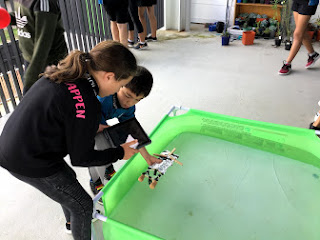 As far as individual lessons and activities went, I tried my best to 1) make them hands on, 2) connect them with our school's 4 C values (Creative, Curious, Communicative, Collaborative) and 3) highlight a specific role of STEAM professionals. So for example, some weeks we would look at what a scientist does and is, another week we would look at what an engineer does and is, and so on. As mentioned above, I only had two different lessons and they were usually related. For example, in one week I had the younger learners drive Sphero and the older ones code it. This worked well enough, but there were always children on the fringes for whom things were too easy or too hard. So in this upcoming term, I've decided to go with four different lessons/activities for my 7 groups. One group will be mostly play-based and experiential. This change was necessary because many of our youngest learners have shorter attention spans and had a hard time following when I talked of bigger concepts. I wanted to approach their learning in a different manner and will have the opportunity to do so with this grouping. I'll also have a Learning Assistant available for this and I plan on recruiting an older learner or two to assist in this session. I then three different lessons & activities for the remaining 6 groups - so two each lesson. They will range from a group I'll be trying to push quite far (as they have had some experience and are very keen learners) to a group of young and excited children who like what we're doing but just haven't done it before.

Another change I want to make this term is to highlight someone who's done something noteworthy in each session. I was inspired to do this by seeing various articles about Dr Katie Bouman who was the lead scientist in charge of taking the first picture of a black hole. I want to be able to give my learners some inspiration for what they could do and I thought this was a good way to do so.

Here's a look at a couple of the slides I've used this past term:

As some readers may also know about me, I've been working on a few projects through MakerEdNZ: namely Coding Across the Curriculum & the Monthly Maker Challenges. In this past term, I made an effort to tie these in together. Having been preparing for this year for a while now, I've not actually had a group of learners of my own to participate in these things, which is somewhat necessary for me to make them better. We've done two of the challenges now and one of the coding across the curriculum videos. I'm definitely going to keep using these (especially the Maker Challenges - which will be the topic of a post one of these days) as I feel like if given enough participants they could become a very meaningful way of sharing STEAM learning throughout New Zealand.  Here's the latest challenge I've made:


I've also been very lucky when it comes to resourcing this year. Despite being a new school (and not having had years to build up our resources) we've spent some money on some useful tools for me (and the rest of the school) to use with any STEAM learning experiences. Our first major purchase was a kit of 15 Sphero Bolt robots. We've had many of our children excited to learn on these and after only one session with me, many have discovered some interesting new ways to use them. The long term plan (at least until we get another set of robots in the future) is to use these once a term with each group to start build on their knowledge base around them. We've also managed a set of Makey Makeys (which again, went down very well with our learners) and have just ordered a set of Micro:Bits. I've been given a healthy budget to acquire more things so that has been super helpful, and there is a lot of that left, so I'm looking forward to exploring some of the things we can get for my future STEAM sessions.

Going forward I've got a clear plan of action. I will continue to do one-off sessions to get the learners more familiar with a variety of technologies and ways of engaging learning. We've been developing a series of inquiry processes that will be introduced more and more in my STEAM session, but also in our Trans-Disciplanary Projects - another aspect of our program that I'll be supporting. We're also looking at creating a few clubs to help push our more keen and older learners. Competitions are also going to be a focus for the remainder of the year, with us looking at the Epro8 and Lego First League as priorities.

I'm really excited both about what I've accomplished in one term, but also for what the future holds in this role. There is a lot to do, but I feel like I've made a great start!

For more information about the STEAM program at Matua Ngaru, visit our website.
Posted by Michael D at 1:14 PM