I'm super far behind on my blogging. I've actually already had the third Science Unleashed lesson, but I've not written about the second.

After the first night, I was very excited to get back to the North Shore (without the wrong turns this time!) and see what Chris had in store for us. When I walked in, there were a variety of some really cool things on the table: motors, cardboard, propellers, battery packs. This was clearly going to be a fun evening. 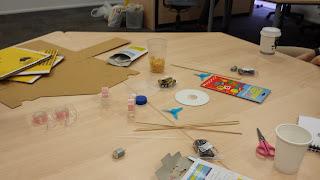 We were again working in partners and our task was to make a vehicle that moved. We had a certain amount of time to build our first prototype and test it, with very little direction - except for the basic concept of the car and how we could potentially make it. My partner and I quickly discussed what we wanted to make and divided up the tasks. We made our vehicle quickly and when it didn't really go, we looked at the problems - the wheels were a bit sticky and not turning easily, the motor didn't have enough power - and decided how we would modify it.  We made smoother wheels and added a second battery pack (some may say this was cheating, but I'm not among them). 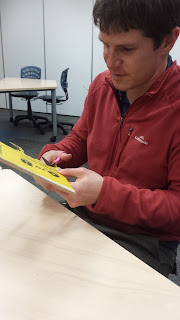 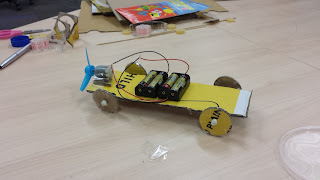 Here's a video of how our test worked out at this point:

Afterwards we had the conference like we had the week before, but instead of just discussion what we could potentially test and change, we came up with a plan of who would investigate what. We ended up looking at whether or not weight made a difference or if more power made a difference.  When we tested these as a group, ours went quicker than everyone else's - most likely because of the extra battery packs.

Again, we had a discussion on how we could improve our vehicles.

What was interesting today was not necessarily what we did, but how our scientific community evolved from week to week. We learned from our mayhem the week before and became more organized in our methods, which led to us being more successful in coming to a consensus in the end. I'm going to give Chris the benefit of the doubt and say that this was his plan - get us to create our own community. I look forward to the last two sessions (spoiler - the next one was pretty good too!).