After famously attending three sessions on Breakout EDU at the Google Summits in Auckland and Wellington (and attending one with a fellow Habitat Learning Coach) we decided to give it a go in our Habitat to get a positive start to term 2 this year. 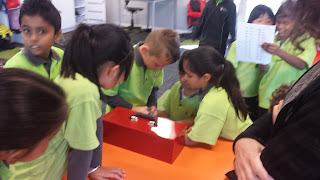 For those of you who don't yet know what it is, Breakout EDU is a classroom version of escape rooms. Learners are given a task which involves finding clues to open up locks to break into a box. Each game has a story to go with it to make it interesting and often the clues are related to a specific are to help the learners consolidate their knowledge.
Given that we had 90 learners we decided to split the children into 4 groups and run two sessions concurrently and then two more later. We chose to use a game based off of If You Give A Mouse A Cookie, but changed the objective that a mouse had come in and stolen some of my lego, which was locked up in the box.

Though I've played several games before (ISTE 2016 Champion) and even helped out with facilitating one, I had never done so by myself before. So I was very nervous and very worried I might make a mistake. The great thing about Breakout EDU is that they have very detailed setup instructions including a step by step video. Once I sat down with all the materials, it was quite easy. I really enjoyed hiding the clues throughout the habitat. 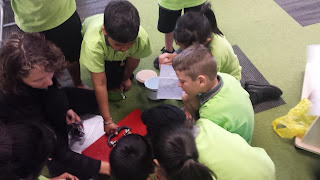 The actual implementation of the game went alright. We had a number of adults in the room who had never experienced it before and we discovered many issues with the way the clues were set out (they had a particularly hard time figuring out that a pot of pencils was actually a clue. But, as we stepped back and gave them tiny little hints, they did manage to figure out all of the clues and open the locks. As was to be expected, the learners didn't really talk to each other about the clues. One of them had decoded a message as to where something was, but didn't understand the message. She left it and walked away but didn't tell anyone. Later, when some other children were told of the clue, they immediately understood and found the key. It was a good talking point when we had our post-game reflection.

This was a really good chance for our learners to learn some real world problem solving skills. They had to think in ways that they hadn't had to previously. They also had to work together and talk. I think when we do this again, there will be a marked improvement in their communication skills (and the way they look at the clues). 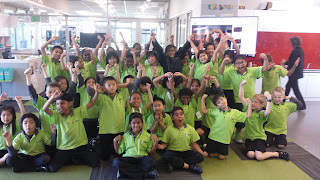 So my next plan is to keep on doing these every now and then - the learners enjoyed them and I enjoyed doing them. Eventually I would like to start making my own games. At the moment they seem a bit complicated, but all I really need is a few hours to sit down and think when my brain isn't worried about other things. Given that we're making some big changes in our habitat at the moment, it's not likely that will come about any time soon, but one never knows...