This year I was fortunate enough to be accepted to present at both the Auckland AND the Wellington Google Summits put on by the Ed Tech Team.

Since the beginning of the year, as can be evidenced by my lack of posting regularly on here, I have been very busy and overwhelmed with the implementation of new ideas at Ormiston School where I was put into a habitat for the first time. So a lot of the drive that had previously been in me had slowly disappeared.

But these two Google Summits gave me my drive back. It's funny how you don't realize what's missing until you get it back, but I had mostly disconnected myself from my core online PLN and was suffering because of it. Coming back to these summits and spending four days with my tribe was extremely helpful in sparking my drive to make innovative change.


My four sessions went fairly well. Two were on how to use Mystery Hangouts (or Skype) in the classroom to connect with other classrooms globally and to promote critical thinking skills and problem solving, while the other two were on how to use Google Forms to make Choose Your Own Adventure stories. After some sessions last year that were more of me talking than of the participants actually, you know, participating, I made some changes and made sure that the majority of each session was a chance for my colleagues to try something new. For the Mystery Hangout session we ran a mock Mystery Hangout. For the Choose Your Own Adventure session we actually made our own Choose Your Own Adventures. Further to this, it gave me more ideas of what I could share in the future (and I'm going to keep some of that on the down low for now).


One tangent that these sessions sent me on was to create some sort of resource for teachers to connect with each other so that they can do a Mystery Hangout. I had used a padlet in my presentation to collect details of classrooms that might be interested, but on my long drive home from Wellington and after a suggestion from one of the attendees there, I am currently working on a small website for NZ teachers to find each other for these Mystery Chats (not trying to favour one over the other). So hopefully I'll find some time to complete that task soon and then share it with my PLN to get a global group of people who want to connect with NZ schools.

I also had the opportunity to attend several sessions at the summit which have led to some new thinking and tools for me to use in the classroom. Over the four days, I attended three (yes, 3) sessions related to Breakout EDU. Two which let me experience the game play (I've done it a few times before, admittedly) and once where we got the chance to brainstorm and look at the process of designing games. I'm actually quite interested in using this in the classroom (and we actually trialled it this week - but that's another blog post) so it was good to get my brain thinking about what we could do and how we could do it. 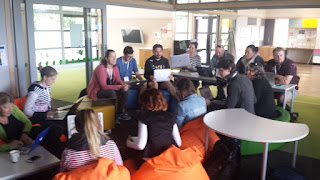 Another session I attended included using the G Suite Apps on iPads. This has long been an issue for me in the classroom/habitat. Often we say we have 40 some odd devices (for 90 learners, mind you) and 10 of those are iPads, which don't have the same functionality as chromebooks. However, we were given some tasks to try on the iPads and I managed to figure out how to do a variety of things on it that I had previously thought would be difficult to do.

There were also a few sessions on Computer Science and coding. One was a reiteration of the CS First session I attended last year, and this helped reaffirm the need for coding in the classroom. They have a variety of modules that learners can go through to practice coding. This got me thinking about the ways in which we can add coding to the curriculum and embed it through other subjects. I've made some tentative plans to work towards some practical, hands on coding in all areas. A second session I attended shared lots of resources for higher level coding. One resource that stood out in particular was the Khan Academy and Pixar joint venture: Pixar in a Box. Mainly geared towards older learners, there are certainly some aspects that can be used at the primary level. And don't think I haven't contemplated learning how to digitally animate and change careers! Probably not though...


I also finally attended a session put on by Angela Lee on Virtual Reality. Having worked with her for ages and ages, I've never actually gone to see her present. It was very helpful in that I now know how to use both Google Expeditions as well as another application that allows learners to make their own 3D virtual world: CoSpaces. These are two things that we're examining to add to our curriculum throughout as many areas as possible.

Overall, I was pretty pleased with the four days at the summits - and I quite liked the drive as well (it's always nice to see the green of New Zealand). It's given me a new focus going forward and sparked that fire in me that has recently been in hiding.
Posted by Michael D at 10:19 AM