So once again I made the trip across the Pacific to the US of A to ISTE. After the first time over, it was hard not to make the trek again. There simply is nothing like it (at least that I've been to) over on this side of the world. This year, I felt like a veteran, knowing the best way to get the most for my time in San Antonio. I wanted to avoid wasting time listening to people talk at me and make some real connections with real people doing amazing things. I also had a long list of ISTE friends to reconnect with. A lot of people go to conferences to hear the latest new thing (and I definitely like learning about that stuff), but connections are more valuable to me, with some really innovative, off the wall ideas thrown in there.

There were some clear themes throughout the conference this year.  The most obvious thing that (it seems) everyone is doing is VR. So many different presentations and poster sessions included it. In particular, I did visit the CoSpaces booth and was quite impressed with the ability to create your own 3D environments. I'll definitely be watching their website for the educator and school accounts (I could be a bit off on the names, though). There's also some really cool new AR stuff coming from Google 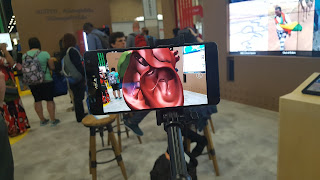 I also had a lot of good conversations and got some good ideas from a lot of the big robotics companies: SpheroEdu, Wonder Workshop, Ozobots and a few others. They all have some pretty helpful STEAM activities and other lesson plan ideas that can be used. 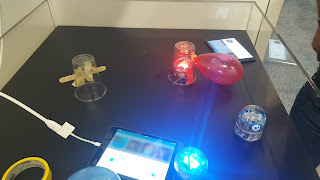 The same goes for some other companies that produce other technology things: OSMO, Little Bits and Bloxels stood out, as well as Microduino. There was a company that made some neat little robots called SAM robots, though I can't seem to find a website or pictures of those. As always, a visit to the Lego Education booth was one of the highlights (if I had a million dollars, I'd get two of everything!) 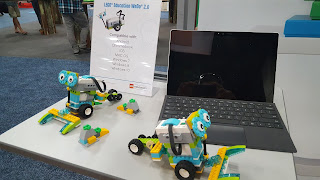 Though it was not as prevalent as years past, there were still lots of ideas for using Makey Makeys, both with the good people at the booth and with presenters. I did learn that you can have an output (eg, make a light flash), so that was kind of cool. Plus seeing what some learners have done with it was helpful to see how it could be used.

All of the above are definitely on my wishlist and would be super helpful in creating a fun and STEAMy classroom that engages my learners. Over the next few weeks/months, I'm going to look at how I can use what I've got to do these things, but also at ways of obtaining some more of these things.

But by far the most important thing from ISTE, as I mentioned above, was the people. Last year I met Shannon while we were each making our own binary bracelets on the first day. We then ran into each other multiple times over the course of the conference. Last year we said we would collaborate on something, but then never did. This year, if you can believe it, we ran into each other once again on the first day, and once again making binary bracelets (why both of us needed another one this year, I'm not sure). We caught up briefly and visited each others' presentations. Now, we've been talking about doing some sort of global collaboration project with each other this year and co-presenting at ISTE next year. So that's kind of cool. And hopefully putting it up here will also help me not forget to do it this year! 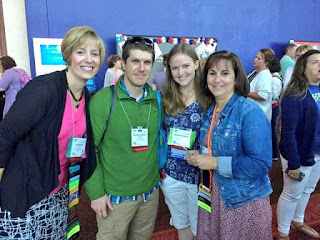 I've also made another handful of contacts of educators in the US who want penpals (have actually made contact with one, and planning on one or two more right after this blog post).  Furthermore, saw my friends from Kiva again and will be wanting to perhaps get some more things going on with them.

One of the big things that has come up in EdTech in recent years is the idea of ambassadors for certain companies. I'm definitely looking into a few as many companies do not have educators from New Zealand working with them that closely yet. Hopefully within the next few months I'll be on here writing about all the new connections I have (as well as my global collaborations).

To anyone who has never been to ISTE, my advice to you is GO! Chicago next year is a wonderful city and ISTE is an amazing experience. The incredibly inventive things you'll see and the inspiring people you'll meet (and in turn inspire yourself) is definitely worth the cost of getting there (and as an added bonus for NZ educators, you get a week of summer in the middle of winter). If you're interested in coming along next year, let me know and we can meet there! The site for Chicago is here. Calls for presenters open in less than a month!