Fourth Time's a Charm, or I'm a Google Certified Innovator

Three times before I have applied for the Google Innovator Academy and three times I have received the rejection email with varying degrees of dismay. But each time I refused to give up, knowing that if I kept at it, I would be selected. That being said, I was still quite nervous for this current round, since it was in my part of the world.

I was not to be dismayed this time. While on vacation in New York City, I had a flurry of activity on my phone, which all indicated that I had been accepted. I was extremely busy at the time so it took a while for everything to sink it. After my holiday, I came back to a very busy school term, so was also quite rushed for time.  That being said, I still managed to get everything done in time for the academy, which was probably one of the best experiences I've ever had.

If I had to choose what my favourite part of the two and a half days, I'd have a real problem. Pretty much all of it was incredible. The best I can do is point out two aspects of the academy that will likely be instrumental in going forward: The connections with other innovative educators around the globe and the design thinking process. 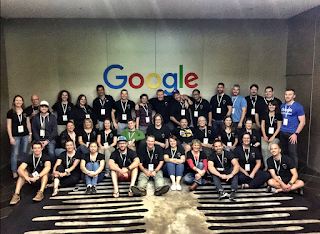 With me at the academy were 36 other educators, and many coaches and other EdTech experts. My close team, the Lucky Unkos made immediate and strong bonds with each other, and functioned not only as a well-oiled machine in all the activities we did, but also ended up winning quite a few things (or coming close seconds). By going through the process together, we formed something of a family group together and will now have each other to lean on through difficult times. One of my good online (and in person) colleagues was actually placed in this group, so it was nice to have that, but it was also nice to work closely with others in this capacity.

The whole point of the academy was to help each of us work on an identified problem in education and to develop a solution to it through the design process. Though I had had some experience with this, clearly I didn't know enough, because over the 2 and a half days I was immersed into the world of design thinking in a way that I could never have imagined. We started from the beginning by looking at all of the reasons why the problem exists and then examining the person (or people) to whom our solution is directed at. We spent lots of time slowly developing our ideas and giving each other feedback. Eventually we all developed a prototype of what our solution will be.

This process was absolutely amazing and I've already brought in many of the ideas into my practice. In our iExplore block, I've taken four of my groups and run through a watered down (but still pretty robust) version of this with the projects they had been working on.  Already the results have been pretty positive with all four groups working on some pretty interesting solutions (so watch this space in the coming weeks when I'll have time to share what they did in more depth).


My actual project is based on helping educators integrate coding into the curriculum. Here in New Zealand, computational thinking is meant to be part of the curriculum next year. Before the academy I did a survey and found that many educators were not teaching it (about 50%) and those that were had had very little training or support. So I wanted to change that. After the whole process at the academy, I decided on making a storyboard of a video for my prototype. I'm currently in the process of turning that storyboard into a script which will then be filmed. It has been a busy few weeks since I came back (mostly taken up with ERO and some big personal things), so I'm hopefully going to find some time in the coming week to work on it. At any rate, I was matched with my mentor today, so that's another great step in this whole process. I look forward to sharing with everyone how this project is going in the future!
Posted by Michael D at 9:24 AM