This past term I ran a Stop Motion workshop at school for a writing project. I had about 50 learners from my Habitat sign up for this choice, so I was pretty excited for that, though a bit wary of managing the groups.

We only have 10 iPads (plus a few BYOD devices) so through necessity I had to put the children into groups of 4, though at the smallest, I would have had three, so it worked out pretty well. I let them choose their own groups because I wanted them to be mixed up as much as possible. I figure (and have figured for a while) that they all have something to bring to the table. Even if they are not great writers they still have some great ideas. Grouping them helps ensure that they'll come up with some amazing ideas and that they'll likely have the skills they need to do what they want to do. Or at least a better chance of it.

Previously, we had offered Stop Motion as a choice and it had turned into something of a disaster. For starters, we were unable to properly support the learners in this endeavour when it came to planning out a story or in actually filming it. This term we had decided to give less choice (but still some pretty awesome choices - the two other workshops that ran were making a newspaper and making storybooks) so we could focus our direction. So I started this term with having the learners plan out their story roughly. I did give them the option of using a variety of materials, but all the groups but one chose to use Lego in the end (which was great because I had just brought all my childhood Lego back from Canada).

Here is how I had them plan out the story. I decided that I wanted them to have more than 1 scene, and since we all love the 5 parts of a story, I gave them five boxes. But what I didn't do was tell them that the story had to have specific parts (eg the introduction, build up, dilemma, resolution and ending - or whatever five parts you call them). I wanted to make them think that things had to be in a sequence, but at the same time I didn't want to limit them.

The next thing I had the groups do was to write a script. I gave them an example, which included stage directions. To me, this was important. While I did want the learners experimenting with the Lego to come up with their story, I also wanted them to put some good thought into their story beforehand, so they didn't start the story without knowing where it was going. This writing took a while, but in the end, the discussions that came out of it were incredible and the quality of the stories definitely benefitted (for the most part)

Not all scripts were this good, but I particularly liked this groups' because they put lots of directions (and if you watch their movie they may have actually said the directions as well - which was helpful in determining what was going on).

The last part of the project (ok, it was actually two parts, but the second part of this was much easier than the first) was to teach the children how to actually use the technology (which in this case was an iPad and the Stop Motion App). The biggest issue the learners had had when they had worked without guidance was how to actually film the video. They would often just take a picture while holding the camera and then move somewhere else and take another picture. The videos were all disjointed and didn't really make sense. So, with 50 children all around me, I showed them how to set up the iPad so that they didn't need to hold it - thank goodness for Airplay! I showed them how they need to make small changes for each picture, not big ones. They mostly took the advice (as can be seen in the videos) so I was pretty happy with how that turned out.

The last part of the last part was to add sound. This was fairly easy once they discovered how to do that. We had a few issues with groups recording the sound, previewing it and then nothing else because they didn't realize they had to click Accept. A frequent frustration that came out of this part of the project was that the people went too fast. Perhaps I didn't quite capitalize on this realization to teach them about how long it really takes for people to talk when you're filming frame by frame. But for the most part the managed to improvise (most just slowed down the speed from 5 frames per second to 4 or even 3).

Have a look at some of their finished projects here:

During the last week of term we had a sharing day for all of the writing projects. We put the videos on a loop in our Media Space and it was quite the popular event. It was really amazing to see their final projects up on a biggish screen and to see them enjoying each others' work. 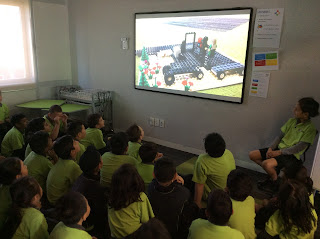 Overall I was extremely pleased with the results and with what was seen during the process. A lot of the really great bits of learning probably won't even come out of the videos. The sets and stories they came up with orally and the problem solving they had to do with the filming were amazing to watch. At one point during writing time a fellow learning coach and I remarked how we could have walked out of the room and the children probably wouldn't have noticed. They were that engaged and independent.

The one thing that was probably missing was a way to decrease the feedback loop. I probably should have set up a way for groups to share their plans and scripts with each other so that they could get a critical eye and some suggestions. This potentially could have happened throughout the filming stage as well as afterwards to help them in any future projects they might make. That being said, they were working collaboratively so they did have at least an element of feedback from their groups.

So if you have any lego lying around, my suggestion to you is to try this. It's not the first (and definitely not the last) time I've used Lego to try to get my learners engaged and every time the same thing happens: lots of children excited to tell a story! Watch this space for more of the things I do with Lego and learning!
Posted by Michael D at 2:32 PM