Introduction
This Saturday morning, I woke up early to run so that I could go to the first Educamp Science unconference. Luckily for me, it was local, so I was able to enjoy the sunshine before the conference. Having been a chemistry major before I went into education, science has always been something I enjoy. I got to meet several of my twitter friends early in the day and there were lots of choices for breakout sessions.

Data Logging with Stuart Hale
The first breakout session I went to was about Data Logging. The first bit of the talk was about using pictures, since they are a large part of collecting data in science. Stuart showed us how to share between devices when no wifi is available (through airplay on the iPads) as well as showing us how you can use a loupe (a magnifying glass for jewellers, if I'm not mistaken) to make a really cheap digital microscope. In fact, I was able to find loupes online for even less than what he shared. All you need beyond that is some blue tack.

Another neat thing he showed us with the iPads is to use the built in Time Lapse feature on the camera app. You can put it on things, such as leaves, construction sites (I'm trying that now in class, with the builders behind our room), tides, etc to see how things change over time.  He suggested putting a sticker in the corner of the iPad where the camera is, to help children who might put their finger in front of the lens.

He then went on to show us some really cool things that iPads can do. Most iPads have the ability to measure things such as vibrations (a seisometer), magnetism (telsameter) and acceleration (accelerometer). These things can be use to make graphs and conduct scientific investigations (he used an iPad to test what makes a bike ride smoother as well as to see how to make sturdy buildings).

On top of that, there are loads of sensors that can be purchased (temperature, movement, etc) that can be used to make graphs. PASCO was the company he suggested, though I imagine, a quick internet search will provide other, cheaper options.

The next session I went to showed us about some makerspace tools that you could use. The company that makes them is called Fischertechnik. They have reusable parts, which can be really useful in a classroom or for companies that don't want to spend money on something that might fail and be very expensive.

During the presentation, there was an interesting discussion on buying kits vs. buying parts to make things with. Both have things that can make using them prohibitive. Kits can be quite expensive, BUT buying parts can be a very daunting task for someone who is just learning how to use these things in a classroom. It was a good discussion, but I think the answer is a lot more grey than it is black or white.

An interesting website was shared during this presentation, that I hope to look at later: Thingiverse. The site contains a lot of pre-designed things (for lack of a better word) that can be printed out using a 3D printer.

The last session I went to was a discussion about maker spaces and maker clubs.  One of the teachers from Elim shared with us a project one of his students completed: a word clock. The student came and they discussed the process and challenges they faced in making it. The one student alone put about 60 or 70 hours into the project (which was quite impressive, as shown below). One thing that did come out of this discussion was that the original club had a lot of members and they all were working on the same project. Over time, the numbers dwindled until it was just the one boy who ended up finishing it. The teacher spoke that perhaps it was too difficult of a project to START with (not that it was too hard, there is a difference). So, big ideas are great, but aim for them one small step at a time. 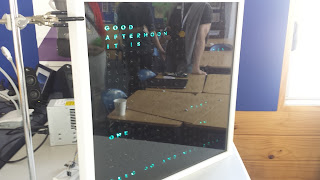 Then Chris Clay (of Mind Lab fame, when I was in their course) spoke about making robots out of recycled materials which could cost less than $25. He uses Arduino boards and imports most of his parts from China (like I've started doing recently). He showed us several models he had made and discussed the challenges. He is one to keep following for tips about this as he has spent the last few months, testing and prototyping lots of different things and is in the process of helping schools along their journey. He spoke of a new way to program Arduino (I haven't learned the original way yet!) which is much like Scratch.  It's called Snap. 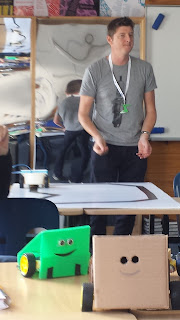 Another thing that Chris (briefly) showed was Lilypad Arduino. I have heard of this before and was considering it. It's a small arduino board that can be sewn into clothing to make wearable technology. I've ordered some of these parts to have a play with so hopefully that will be another post on this blog in the near future.

Overall, it was an interesting day. Most of the things we talked about I had some knowledge of, but each session helped me build on that knowledge and has pushed me even further on my journey. I've got some more confidence to try some new things.

Also, I find that spending time in the real world (as opposed to the virtual world of twitter and blogs) is quite beneficial for my thinking process. People share ideas, ask questions and challenge me. I'll definitely keep attending more of these unconferences!
Posted by Michael D at 11:57 AM