This past Saturday, I attended Educamp Auckland at Aorere College. I was quite nervous because, though I had attended two Educamps previously, this was the first I was going to stand up and share (though, I guess I did share at Sparkshop, but that was slightly different).

The nervousness turned out to be unnecessary, as everyone was amazingly supportive of me and what I was sharing. I guess I have become accustomed to people shooting me down and trying to get me to stop sharing.

I ended up having two sessions out of the three, which was good, but it also meant that I missed out on what a lot of other people were sharing. Though, the conversations are the best part (for me, at least) and I had lots of those.

It was also the first time where I publicly talked about my pet project: #MakerEdNZ. No doubt I will be sharing more of this along the journey, but suffice it to say, I was also overwhelmed by the support I got from many of my twitter friends (I guess they are real-life friends now). If anyone is interested in what this might be (i.e. if you know or want to know about makerspaces) please follow @MakerEdNZ on twitter (or me) and information will be coming out soonish (and probably another post on here as well - when I get caught up).

I did get a number of takeaways from the unconference. The first is (and I can't say it's the first time I've realized this) that I can easily go a bit too fast when sharing what I know. This is something for me to work on (but hey, I'll likely get a chance each of the next three weekends, so there's that).

I also have a few twitter chats planned with other people. It's amazing how quickly things can happen when you're in the right company. I'm excited and a bit nervous for this, but looking forward to both of those opportunities.

It was also a really great experience (going back to #MakerEdNZ) to give others a chance to spend some time doing some STEAM activities. I brought some copper tape, LEDs and batteries to make paper circuits. This is part of what I want Maker Ed NZ to be doing, so it was a good first step (though I wish I would have gotten some more pictures for the twitter account.

If anyone reading this has never heard of an educamp, I strongly urge you to go to one (educampBOP is this weekend). Thanks to Jackie Allen and Stuart Kelly for all their organization of the day. Was definitely a positive way to spend my Saturday! 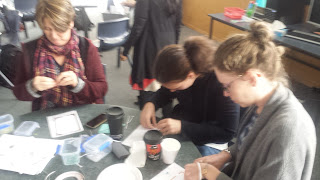