Once again, this past Wednesday I made my out to Te Atatu Peninsula Makerspace for their weekly meetup. I wanted to a) learn more about using Arduino (specifically sensors), b) potentially figure out what's wrong with my mBot and c) continue to build a relationship with people who actual know how to run and organize a makerspace so that I have some real-world experts to help with MakerEdNZ.

Overall it was a pretty good evening. Though the weather was bad there were a good number of people who could help me figure some things out. It was nice being in a room of problem solvers - people who will try different things to figure stuff out. With some help I set up a photoresistor sensor on the Arduino board to check for light. We had a good discussion on what the results actually meant (I was getting high numbers when it was dark and low numbers when it was light, which was confusing to me).

The subject of my non-working mBot came up as well. Another person there helped me use their mBot to try connecting it via the 2.4GHZ connection. It worked reasonably well and I was able to explore a little bit about the sensors on the mBot. It was good because while I was doing so, I was able to imagine in my head how these lessons and ideas could be put to use in a classroom or makerspace (and now I have some skills to work with as well).  The unfortunate part was that when I went to school the next day, I was unable to get the mBot working completely, so there must be some other issue. So there will be a visit #3 coming up soon (I've signed up to go next week and the week after, but we'll see if I can actually make those days).

Anyone interested in makerspaces or joining us for #MakerEdNZ, I'd suggest visiting a community makerspace and see what they do. Everyone I've met has been very friendly and extremely willing to help. You can find lots of those on Meetup. 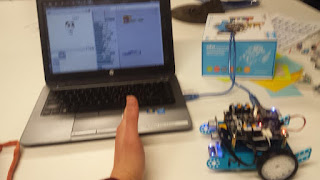