It has taken me a few weeks (almost a month, in fact) to fully come to grips with my ISTE 2016 experience. To sum it up in word: Amazing! But obviously there were some really good takeaways that came from the experience. I'll try my best to share all of what I learned, but no doubt some good stuff will get left out.

edit: Now it's almost two whole months after ISTE! But still thinking lots about it. Some of this may be repetitive because of the time between when I started writing and when I finished, but I think the tone that will likely be consistent throughout will convince you of the value this experience had for me and could have for you in the future.

The first place you need to start when dealing with ISTE is the people. I'm not talking about the sheer number (though that is staggering on its own). What I'm talking about is the people you meet. The biggest draw for something like ISTE is to meet lots and lots of like-minded and incredible people. And don't get me wrong, EVERYONE at ISTE is incredible. When I told one of the people I met that "I'm just a classroom teacher," she responded by saying that nobody is "Just" anything. We all have something to offer, no matter the title or experience. Though I did realize this before, it was interesting to see how our language can affect our perceptions (and the perceptions we create in others). Later on that day, I met someone who said pretty much the same thing about being "just" something. I was spurred on to share my new perspective.

There are also countless opportunities to meet and connect with educators around the world (well, mostly the US). There is so much value in this for all of us and our students who will benefit from these connections. I made a concerted and deliberate effort to seek out new people and talk to some who I wouldn't have otherwise spoken with - including the CEO of ISTE! I made several great connections which will help me make further connections in the future. It's all about the people. If that were the only result of the week in Denver it would have been worth it completely.

On top of meeting people at official conference events (probably the best source of that was the Global Ed Day - a great group of people to connect with, if you're looking), there were several social events which turned out to be just as valuable. I had made it my mission to find the "seedy underbelly of ISTE" this year, and while it definitely wasn't seedy, it made the conference that much more impactful. My only regret is that I didn't find more events to go to. In all, I attended events put on by Wonder Workshop (happy hour at a restaurant), the Ed Tech Team & Symbaloo (Karaoke), Gaggle (a party) and OSMO (a Sneak Peak event). All of those events, helping to strengthen my PLN (personal learning network for the uninitiated). I was able to build on some of the connections I made a year prior and hopefully will be able to build on these ones in 2017 (because yes, I'm going).

Having been at ISTE last year, I found that there were a lot of things repeated, but with more development. There were literally tons of resources (if you weighed them all together, there is no doubt of this) showing how makerspaces and making can be used in the classroom. Many people were sharing how they've been using their robots (many of which I bought last year after ISTE) and other cool gadgets in the classroom. For example, there were many people sharing what they've done with paper circuits (a shout out to Chibitronics & Spark Fun who both gave me some free samples to use in my classroom) as well as robots (guess who won a free kit from Hummingbird?) One really cool startup that was sharing in the expo was Hyperduino which had some really simple applications with their custom built arduino boards. They ran out of free samples by the time I got to their booth, but I may pony up the dough to get one.

It seemed like everyone had a Dash & Dot, Sphero & Ollie and Ozobots. Not to mention Makersaces. Perhaps this, too, was one of my big takeaways from the conference, and (since it's taking me forever to write this reflection) one of the things I've been most active promoting since I've returned. While I'm fully trying to gear up my classroom's Makerspace, ISTE this year has planted the seed of a big idea in my head. I'm working now to start #MakerEdNZ, a community of schools and teachers who are using Makerspaces in their classrooms. I'll write a long post about it later, but for now, just know that ISTE inspired me.

The only actual planned event I went to at ISTE was the Global Ed Day 2016. What a great group of people. Again, this is something I want to explore in much greater detail. Yes, we've done Twitter chats and Mystery Hangouts, but those connections are only on the surface (but again, much, much better than no connections at all). A lot of the talk around the Global Ed Day was starting collaborative projects between schools on different continents. This is another area for leadership within New Zealand, I feel, and something that is many people are primed for. We'll see what comes out of this, but perhaps someone reading this will take the call to arms and run with it. I only ask that you please include me.

So it has taken me 2 months to get this far in my reflection. But that provides a great opportunity to reflect upon how those new things are going. Probably the most immediate thing I tried was Seesaw. For anyone who hasn't heard of this before, I urge you to have a look at it. I was lucky enough to have it explained to me by a teacher at the Seesaw booth in the expo. It's basically like Facebook for schools. Using the app (on tablets, phones or chromebooks) my students can take pictures or videos of their work, record an explanation over top of it, tag themselves in it and just generally share their amazing ideas. They can like each others' work and make comments - both written and oral! And I've only scratched the surface of what I can do with it. So far my students have found it super easy and have enjoyed sharing.

I also re-met my good friends at Kiva, which got me back to teaching the Kiva U curriculum (in the small amount of time that I can fit it in).'

I've also given my students focus with the Student Blogging Challenge. Though we may have been a few months late, meeting some of the people who have set this up, got me intrigued. My students have had some ups and downs with it (some of them spent a whole week or writing time making an avatar, not saving it, then making a new one), but overall it has helped teach them about blogging a bit more.

Another, practical thing I saw at ISTE and brought back to use were all the paper circuits that were being shown. I was extremely lucky to have been given those starter kits from Chibitronics AND Sparkfun, so I had a go with that at school AND at some educamps. It was interesting to say the least and something I want to look more into.  I was also given the chance to make a wearable circuit with some Lilypad Arduino components: 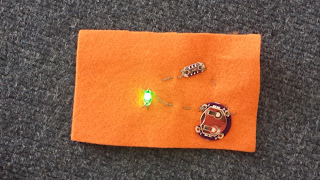 One of the sessions I went to was actually done as a walk around Downtown Denver. The presenter was telling us that we should be getting our students more active in class, and building movement into every activity. I had previously had swiss balls in my class but had given them up because of some behaviour issues. However, he inspired me to pump them back up and get my students moving more often. A small thing, but I think it's something that's important.

I could go on for pages and pages talking about how ISTE has changed me and my practice, but my biggest advice is: Go next year to San Antonio! It will change so many things about how you see teaching and give you so many ideas to help you do so. It will give you connections that will change your idea of teacher-teacher relationships and the way our profession should interact. It was honestly the best four days of the last year for me. Unlike a lot of the New Zealand based conferences that I've been to, ISTE has made me feel that we lone nuts are much stronger in numbers. It's nice to have our smallish group here, but expanding beyond our shores, in my opinion, is never a bad thing. Being part of something so big, is truly empowering. Meeting so many genuine people who only want the best for their students is inspiring. So, I urge all of you Kiwi teachers (and why not all my Canadian teacher friends as well, I belong to two countries), come with me next year! Come join my tribe!
Posted by Michael D at 11:41 AM