A Day Full of Lego

Anyone who knows me (or who has been in my home) knows I have a little bit of an obsession with Lego. So when the opportunity came up to learn about some Lego resources that can be used in the classroom, one could easily imagine that I would literally jump at the opportunity. This morning I made the drive down to Te Matauranga School and was immediately transported back to my childhood dreams when I saw the sheer volume of Lego that was present at the school. It was amazing!

And it only got better from there. We spent most of the day working on some hands on activities, all to do with Lego WeDO 2.0 as well as with EV3 robots. Our amazing facilitators (who came across the ditch from Australia) made sure we had a lot of things to do.

The first thing we played with, was the WeDo 2.0. I had seen this in previous years (I'm sure if you go back in my twitter feed, you'll see it) and in the interim had never really gotten a chance to learn more. We did a few activities with this. The first was to take 10 pieces from the set and make any animal. We had two minutes to do this (with the wonderful advice of start with your hands and let your brain catch up) and as you can see in the picture below, not one of us made the same as another. It's a great way to get started when you're working with Lego (or anything else for that matter) to show that everyone has great ideas and they can be very different from each other. 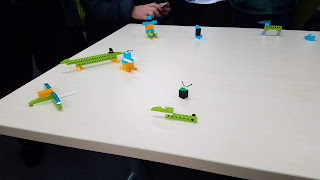 We then used the app to make a windmill (or a fan) and then have a bit of a play with the coding. It is very easy to use, and has a lot of different functions. Our last challenge was to make a music machine. I spent a good bit of time of this, iterating and making new versions, adding features as I got inspiration. It was all good fun.  Here's a tweet & video of what I made with my partner:

After a break for morning tea, we spent the remainder of the day with the EV3 robots. While the WeDo is for younger children, the EV3 has more capabilities and is more suited for older learners. We first learned how to make a quick build (not Lego Certified) to do some testing on getting the robot to move an exact distance. We started with 15cm, then 40cm and finally we tested our calculations on 2m exactly. We did this, however, with a minifigure called Daredevil Dan. Due to some inaccuracies at the 40cm level, our calculations were out quite a bit. Though eventually we managed to get it close (though, I guess it didn't work if we just nicked him at the end). Our trials are reversed here:

Daredevil Dan almost made it (maybe he should have taken a step back) #lego @LEGO_Education pic.twitter.com/xePFKZJFbE
— Michael Davidson (@michaelteacher) August 27, 2018

The last challenge of the day was to make a robot that moved WITHOUT wheels. Again, I spent a good amount of time iterating and improving our robot. On carpet, our robot moved quite quickly, but on the lino, it was not so fast. It was still quite menacing and I think I may have a future in some sort of robot wars type competition.

Another thing that we discussed was the First Lego League. Every year Lego sets out challenges for both Juniors (using WeDo) and Seniors (using EV3). You can register, get a pack of pieces and then join local competitions which can lead on to national and international competitions. Lego First New Zealand seems to be growing rather quickly, so it's probably a good time for schools to get in on it. The national competition here is on December 1st, I believe. All you need is an EV3 or WeDo and to sign up on the site to get the materials (which do have a cost, but it's worth it, I'd say). Even though I can't do it this year (my school has no learners until next year) it's definitely something I'll be looking into for next year. 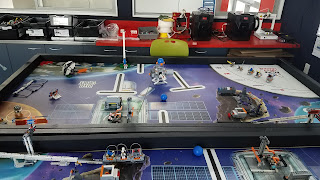