Yesterday was a busy day for me. After my guest spot on The Suite Talk, I attended an event put on by the Sir Paul Callaghan Science Academy. In 2015 (before I started this blog, that's actually a bit hard to believe, to be honest) I attended the Academy in Havelock North, and it was an amazing 4 day course where I learned a lot about teaching science and how interesting and relevant we can make it (because making slime and putting mentos in coke does not constitute a science program - sorry for those of you who think it does). This year they are offering half day workshops for alumni so I decided to sign up.

It was definitely worth the time and effort to get there for the two topics that we covered: Models and Causal Thinking/CERR (Claim, Evidence, Reasoning, Rebuttal).

Models are a great way to help make any concept clear to a learner - not just in science. Often we forget that as adults we have had lots of experiences which leads to a lot of ways our brains can visualize complex ideas. Children don't necessarily have those experiences so as educators we can help foster better understanding by providing models. Models can come in a variety of forms. We discussed at length a question of whether or not a van or a car would tip over. We used the below cars, some cardboard and a protractor to see which would tip over. We discussed the pros and cons of using the models. It's a hands on activity that can be repeated quickly (fast feedback loop) and helps give a visual of what's happening, but it doesn't necessarily reflect what would happen with a real car or truck.

As part of our discussion, I suggested that we could do some modelling on CoSpacesEdu, so in a few minutes I whipped up the simulation below. CoSpaces has a physics feature which can allow you to simulate many different things. It's not super precise (I didn't have many options for angles, but maybe I just missed that), but it does help give a visual.

We looked at a variety of other models, including drawings, models of the solar system (during which we discussed how no one model of it completely shows what it's like, but they all have some value in our understanding), Lego (a personal favourite), making similies and metaphors, among others. This certainly made me think more about models and modelling (which connects to what Jo Boaler says about Math learning) and will make me more conscious about putting models at the forefront of learning (not just Science learning). I also want to put a shout out to Google Expeditions which has many, many examples of AR models that can be used in the classroom to help further understanding.

We talked a lot about the difference between causation and correlation (and though it wasn't actually mentioned: coincidence) and how that distinction is becoming so important to make, especially with ideas that are being floated throughout social media and by some world leaders (cough, cough). Some of the examples we looked at were the relationship between a full moon and either births or strange behaviour as well as people getting a 6 months to live diagnosis but then having their cancer go into remission. These events actually have little to no evidence to support a causal relationship, but yet some people take small sample sizes that suggest no link between two events and try to convince others of it. A real example of causation, which many have probably seen was this:


I think it's imperative to get children (and adults) talking about cause and effect. Like models, this is something that carries over to all areas (hey, there's a theme! Maybe it's not about the subjects but how we THINK about the subjects...). We should always be examining what the causes are and trying to determine if what we assume to be the reasons for something happening are truly the reasons.  As educators, we can also provide learning opportunities for learners to examine this relationship.

This idea was shared as a method for reporting science investigations, which makes sense and helps build reasoning skills within children. Normally when we investigate something, we start with a question. We then perform a fair test which helps us gather evidence. Sometimes this is where investigations end. Those who continue on often use reasoning to make a claim about the original question and then share the results. Rarely do we think about the alternative case and provide a reason for why it isn't true (that would be a rebuttal). When we're sharing, however, we should start with our claim, follow with our evidence, our reasoning and then with an explanation of why the (an) alternate case is not true. 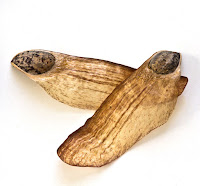 Our claim was that they were not similar to each other because when we looked closely at the seeds there were many differences. The sycamore seeds are spherical while the pine tree ones are flat and elongated. The sycamore seeds also have a main vein on one side which branches off like a wing or a leaf. Lines on the pine tree seed go vertically and don't really branch off. The pine tree seed is also very waxy and thin compared the the rougher and thicker sycamore leaf. We also reasoned that since the trees look actually quite different (Pine Trees are evergreen and Sycamores are deciduous) that the alternative (that they are closely related) is not likely to be possible.

It was a great way to spend an afternoon, all told. The presenter was amazing and we had some good conversations about the topics we learned. I would recommend anyone interested in becoming a better educator of science to try to find one of the free workshops put on by the academy (see the link at the top). They're amazing!