Google Innovator: One Year On (or, It's My Innoversary!)

It's been just over a year since I returned home from Sydney and the SYD17 Google Innovator Cohort. In the past twelve months I have been working hard to implement the project that I planned, along with my team and my coaches. It has been a long journey, which by no means is over yet, and in writing this I'm feeling rejuvenated to continue with these innovative ideas and to start with some more.

Though this is a time for celebration and sharing, it's also a time to reflect upon the failures as well. Things have definitely not gone as I had planned in 2017, but that's alright. I've fallen a bit short of a few of my goals, but at the same time, I'm achieved more in some directions that I didn't even think I was going to even try. It's been a year of growth, but also a year of frustration. I'd argue that the growth would not occur were it not for the frustration (so bring on the frustration, I say!).

So what have I accomplished in 12 months? As you may recall, my original plan was to create a series of videos that would support learners and educators in both teaching coding as well as integrating that teaching throughout different subject areas (though I could have a long discussion about getting rid of subject areas altogether, but that's another post for another time). I wanted to give children and adults a chance to develop computational thinking without having to sacrifice anything else and without having to spend lots of money or time on PD that may or may not be helpful. I've written a few posts about this before so I won't go in depth with the why or the how, other than to say that I feel like my videos have done what I wanted them to do - as far as I can tell at least.

I was a bit disappointed about not getting as much feedback on these. I want to improve things, but it has been hard to get much in the way of what I could improve (beyond what I've thought of myself). So if you're reading this and want to help, that's one thing you could do - there are some feedback forms on the first few videos. The reach of the videos has been alright - my first two videos had 1200 and 700 approximate views as of this writing, though my 3rd and 4th were hovering around 150 while the fifth is still under 100. I also only made five videos, and had hoped I'd be up around 20 by now. Making videos takes a long time and I've had other things going on in the background this past year. That being said, I'm happy with what I've accomplished, but want to continue with these videos. I'm starting a 6th, but progress is slow. Here is the playlist of all five videos (and if you're reading this in the future, hopefully there are more than 5!):

If this were the only thing I did this past year, I'd probably feel a bit bittersweet about the whole thing. But it wasn't. I've also had two side projects on the go and one of them has probably outshone these videos (it certainly has got me WAY more views on my YouTube channel): Digital Breakouts.  What started as an activity at my school turned into me being known as the Digital Breakout guy in New Zealand. I've made 22 Digital Breakouts to this point with more in the pipeline. I'm pretty amazed by this. I've presented on this topic in three different countries and have gotten TONS of positive feedback with them - even though they do tend to be quite difficult. These breakouts have been a great way to connect with other educators (because making a breakout digitally is fairly straightforward and has been replicated by many). I feel like this is a great way to keep learner engagement and teach them skills that may not be assessed by any curriculum, but that will benefit them in the long run. This is definitely something I'm looking to continue, and I've already recruited at least one person to assist me in doing so. I can imagine this being a bit part of what I do going forward and it was originally a way for me to add a few views to my YouTube channel (though it probably contributes to close to 90% of the views I get). 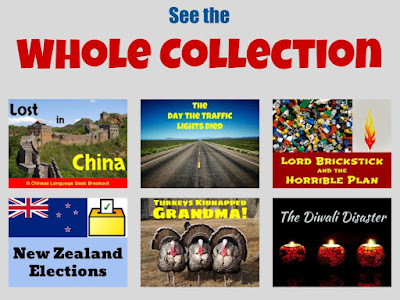 The third part of my project was actually started because I had seen one of my friend's projects (the amazing Mrs Priestley & her What's 'App'ening Newsletter) and because I wanted a way to try and get more people looking at my videos. I started a newsletter of my own called The Monthly Maker. I had a lot of things I'd like to share, so wanted to use this as a platform to do a few things, including, spotlighting Maker Spaces throughout New Zealand, sharing Design Thinking tips and some featured Digital Breakouts, as well as various other tips around Maker Education.

This has proven to be quite an undertaking. I first started making a video or post for each idea, and that took time. For the second issue I cut that back a bit, but was still swamped with things to do. My plan going forward is to recruit some other Kiwi educators to help me build a lasting publication. I have not been able to get issues out for June and July this year due to reports and being extremely busy with life and other such things. I am on track to finish the next issue soon though.

All in all, I'm pleased with how much I've managed to accomplish in 12 months. The upside to all of this is that I've come up with a few more great ideas that are worth working on. As I've mentioned in other posts, I feel energized to do more now that I am a part of the Innovator Community.  I'm looking forward to my next project and to continuing on the three that I've already started. Big things are happening and I owe a lot of that to the Innovator Program, so to those who do all the work behind the scenes, I say Thank You! Here's looking forward to what the next 12 months brings...