A few weeks ago I signed up for the Hive Summit, an online summit that would include several speakers over a week or two. You still sign up for it on the site.

The first video came out yesterday and featured Michael Cohen (no, not the one that's making the news in the US right now - Rabbit Michael Cohen, who was a keynote at ISTE recently). He spoke at length about Creativity, Design Thinking and Entrepreneurship.

It was an amazing talk to start off the summit, and I hope that future videos are just as impactful and inspiring.

Cohen first talked about the nature of creativity. He says (and I've thought this for a long time) that creativity isn't invention, it's the taking of existing ideas and putting them together in combinations that no one else has done before. His example is of Steve Jobs, who took a lot of existing technologies and combined them to make an iPhone. Cohen (and cohost Michael Matera) also argues that creativity isn't an innate thing, but that it needs to be practiced to be improved.

In a discussion around the 30 Circles challenge (where the challenge is to use 30 circles to draw everyday items in 3 minutes) he brought up the idea of Functional Fixedness. That describes the idea that often we think that something only has one use and one use only. We don't always see the different way something can be used and therefore cannot think creatively. However, once we discover our limitations it opens up our minds to different ways of thinking. This activity can lead to very rich discussions about what creativity is and how it can be fine tuned.

The second part of Cohen's talk has to do with Design Thinking (DT). This is something near and dear to me and has been something I've been working on understanding and implementing for the past year now.  Most people who learn about DT know that it centres around empathy and finding ways to solve a problem for someone else, or as Cohen puts it:  "Let me understand you, so that I can help you solve the problem for yourself." He goes on to explain that DT helps us build better relationships. Despite the obviousness of his statement, I had never actually thought of this before. DT makes us think about someone else's needs and helps us work with them. This is definitely something which will help frame my interactions with DT in the future.

In the last part of his talk, Cohen discusses building an Entrepreneurial Spirit amongst our learners. That simply means that we want them to have that grit and resilience to keep going when things don't work. To keep on trying things and trying things until we get where we want to get. He says that big things happen due to years of effort, but that we only see the end part of that effort. We miss the failures and the late nights and all the sacrifices and think that making something new is all about being famous and reaping the rewards of the hard work that we never saw. I tweeted out a quote from this part of the discussion and I think it's so relevant to everyone, especially schools. My future school also needs to look at this and find our own path to success and not be blinded by the amazing schools we see.

Don't compare your beginning with someone else's beginning. That's their success; they've been slaving away at it for a long time @mrmatera @TheTechRabbi #HiveSummit #DesignThinking
— Michael Davidson (@michaelteacher) August 1, 2018

This was an amazing talk and I recommend it for EVERYONE. Understanding the things Michael Cohen is saying is something that will help bring any school forward into the 22nd century and beyond. I am so excited to continue doing the things I was doing and adapting those new ideas he has given me.

Here's a sketchnote of  the talk (I didn't do it) that was included in the materials for the talk: 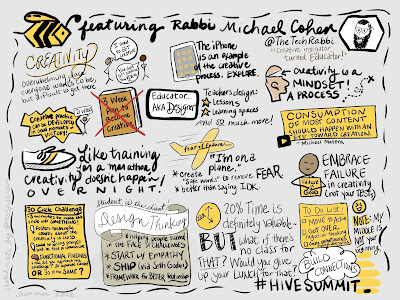 If you haven't signed up already, I urge you to do so as this was an amazing talk! Watch this space for some more reactions to the talks that I watch.