Day two of the Hive Summit included a talk about Sketchnoting by Carrie Baughcum. I was interested in this talk because I've slowly had my eyes opened with respect to Sketchnoting over the past few months and was keen to learn a bit more. And boy did I.

I used to think of Sketchnoting as something people would do to take notes during a conference. Then I started seeing notes everywhere and reading about people who had done them. But I never really thought much about them until recently, and I certainly hadn't really thought too hard about using them in the classroom as a tool.

In her talk, Baughcum told the story of how she accidentally became a Sketchnoter by drawing with her daughters at the kitchen table to running challenges on her YouTube Channel:

What was most interesting about the talk for me, though, were the discussions around 1) the benefits of Sketchnoting with respect to learning and 2) the idea that you don't need to be an artist to be a Sketchnoter.

Baughcum explains in the talk that as humans, we are very visual beings, and the visualization with the added kinesthetic boost from actually making the drawing helps us improve retention, comprehension and focus and also has a calming effect.  I shared this point on twitter and it started a conversation where the idea of people who don't or can't visualize came up:

The more ways we can get information into the brain the more meaningful and impactful it will be.
— Carrie Baughcum (@HeckAwesome) August 3, 2018

I think Carrie's response sums up the whole idea. The more ways we can get children to understand something, the better their understanding will be.

The second point brought up in the talk was that you don't need to worry about the quality of your Sketchnotes. Sketchnoting isn't about the end product and doesn't have to be neat and tidy. It's about the process our brain goes through. She stresses that if you want your learners to have very deep understanding, you need to sketchnote alongside them, failures and all. If you're not a great artist, it may in fact be better as you can model the real purpose of the sketchnotes and help the children feel less conscious about the quality of their icons.

On a meta level, here's a sketchnote that was made for this talk: 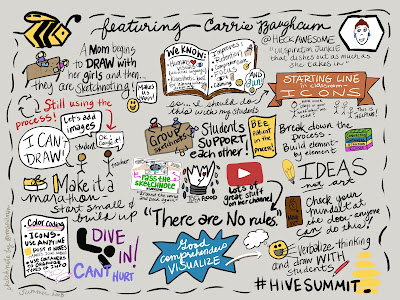 I know that the next time I have my own class (probably February, so a ways away) I'm going to introduce sketchnoting. Thank you Carrie!

It was a very interesting talk and I would encourage all educators if they have the time right now to sign up for the Hive (Summit (the link's above) and have a watch of this and the other sessions. There's one a day for several more days, but they won't be up forever.