It seems that every time I get to listen to one of the amazing Hive Summit talks, two more have been added. I'm falling further and further behind, but the content continues to amaze!

The fifth talk was by Matt Miller, and it touched on a lot of things that I like already - but still somehow managed to expand my ideas and thoughts on everything. It just goes to show how we're all still learning.

The first part of the talk centred around what technology really is and how it is used in the class. Essentially technology is a tool that is meant to make our lives easier and more efficient so that we have time to do other things. We have gone a bit off course in a few different ways when it comes to this. All too often, digital technology is used a pretty much 1:1 substitution for textbooks or workbooks. Other times we teach only with the tech, thinking about what we can do with a new tool. We often forget that we don't just equip ourselves with one tool (a hammer, for example) and try to do lots of different things with it. We use a variety of tools to do a job. But also, sometimes we get what a previous session identified as functional fixedness with some tools and apps. We often think that we need loads of apps to do each different job. But sometimes we need to start thinking about how we can use one tool to do a lot of different jobs. The two previous ideas seem to contradict each other, but I think that the ideal is to find something in the middle: find a variety of tools, all of which have multiple uses.

Which brings me a very relevant part of the conversation for me: Google Slides. I've actually been asked to do a 30 minute talk tomorrow on all the different things I could do with Slides, so this is something I have been thinking about lately. Slides is an extremely versatile app. You can make stories with it (and include my other favourite resource - Lego):

You can do animations with them (just press play to start it):

There are also a variety of other things you can do (hmm, maybe this is something I should do as a presentation somewhere). The point is that they are versatile. The other point is that even if you can't get a specific app (for example Instagram) you can mirror the experience in another app. You could use Google Slides (and have a page for each learner) and they could make an Instagram story on their page to show a moment in a book they've read, as an example. I really like this idea, and it sounds like something I'll be doing in the near future with the children that I work with - and maybe even the adults!)

The last part of the talk was devoted to discussing how to and why you should connect with classrooms around the globe. This is also something I have done a lot in the past, so I completely see where he's coming from. Matt and Michael Matera discussed to side effect benefits of doing these. Not only do children get a chance to see that they have similarities to children around the globe (Matt told of a story where on a call one child started doing the floss, which led to all the children doing the floss), but they also see that there are differences between them and others and that there are other ways of doing things or other ways of thinking. It opens children's minds and allows them to gain empathy. Plus they learn a lot when they're on the calls.

I obviously already drink the cool-aid that Matt is selling, so I'll echo what he has said (though he says it more concisely than I do). I think he's spot on that we need to find ways to leverage technology to make our practice better - to make things run more smoothly so we, and our learners, have more opportunities to learn and create and do.

I'll leave you with the advice he gave at the end of the talk:

Safe teaching (not taking a risk, doing what has always been done) is actually risky teaching, because it's so easy for children to turn their attention switch off. When we're not sure what will happen, we get kids' full attention @jmattmiller #HiveSummit
— Michael Davidson (@michaelteacher) August 7, 2018

Be a maverick teacher. Take risks and change things up. There is so much value in trying something different, we'd be silly not to! 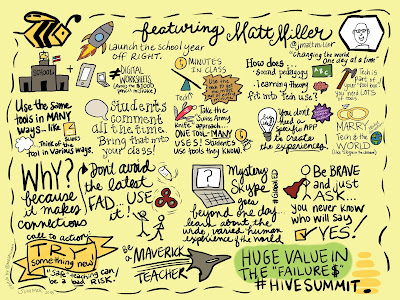