The seventh day of the Hive Summit has brought the shortest video so far (which is great because I was able to watch it during my lunch 'hour'). In this video we got to listen to Sarah Thomas discuss making connections with other educators. I really believe in this topic and, to be honest, feel like this is perhaps the most important idea shared in the Hive Summit, solely because this summit would not even be possible if not for these online collaborations and connections.

Most people reading this probably have twitter (I think most of my readers come from there) so I don't know if I need to talk about how amazing it is as a platform, but perhaps there are those who don't know much about twitter chats.

Twitter chats are probably one of my favourite forms of PD, and not because I get lots of good ideas - and I definitely get lots of those. They're one of the best experiences for me because of the connections with other educators and the relationships I've formed through them. If you've never felt the joy of meeting a twitter friend in real life for the first time, you're missing out on quite a bit.

Twitter chats, as Sarah points out, can be quite a scary thing if you've never been to one. She related a story of the first time she tried to join a chat. She asked permission to join. Well no one responded to her so she took that as she wasn't invited. Thankfully, she kept trying and soon found out that you don't need to ask for permission and joined in. Now she runs her own chat. She talked a bit about getting on to twitter and some of the mistakes to avoid. As a new person to twitter (and I found this as well) it's easy to think that you need to follow everything and read every tweet. While that may be possible when you have 50-100 people you're following, but it soon gets to be too much after a while. Other people are worried about following too many people or getting too many people to follow them. Michael Matera suggested that no one should "fear the follower." Twitter is all about connections and the more you have the more rich your PLN becomes. You never know what any connection could lead to. You could be working with someone in your network - many jobs do come out of twitter connections.

At the end of the day, it is all about finding your tribe - the people who are on the save wavelength as you. The people you can talk to and that will push you to be the best you. But they'll also be there to support you. Once you find your tribe, you'll know. Without twitter (or other connections) it's pretty hard to do this.

Sarah has also stated EduMatch whose goal is to help connect educators with similar interests from around the globe. They even have branched out to other social media platforms, such as Voxer. They've had so many people join, they've had to create more than one group (because they've reached the limit!).

She finished with giving us some advice on what next steps we could take: The first bit of advice is to take advantage of online learning opportunities (like the #HiveSummit!). Share your thoughts, reply to others and find other ways to participate. The more voices, the more ideas. The more ideas the better we can all become. The Hive Summit is not the only online summit; there are educamps online. The in-person educamps are amazing, but sometimes you just can't get to where they are. Find one online and join in.

The second bit of advice was that if there isn't this opportunity for you, why not create it for yourself and others? Make the spaces where people can collaborate. Organize a way for like-minded people to connect, whether it be online or in person. These things would not happen were it not for someone or a group of people who spent some time and effort to make it happen. (And on that note, a BIG thank you to the organizers of the Hive Summit!)

The last bit of advice Sarah gives is that you should be prepared to have everything change for you. If you start connecting online, you'll start to think in different ways and learn new things. You will change. Learn to embrace that change. Since I've joined twitter, it's changed me constantly and continues to do so. I've not looked back since! 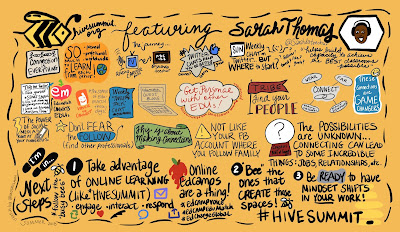