Every time I watch a Hive Summit video this week, I think: "This is interesting, I know a bit about this topic," and every time I'm blown away by the insights provided by the speaker and host. If you haven't signed up by now, I urge you to do so and to watch the videos of the talks, or even just follow along with the twitter chat.

The most recent video I've watched (because I'm slowly getting behind and I want to make sure I can fully focus on the videos), featured Tara Martin, where she spoke about Being Real and how to be relatable so that you can affect positive change everywhere in your life. I honestly thought I knew a lot about this idea and topic, but the conversation between Tara and Michael Matera has helped me frame ideas and thoughts a little bit better. 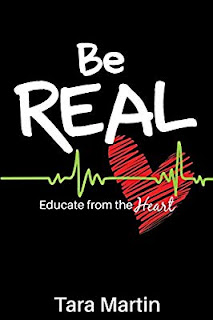 Let me first give a plug for Tara's book: Be Real. If the book is only 10% as good as the talk I listened to earlier today, it's worth every penny you'll spend on it. You can find info about the book HERE.

There is no way I can relate everything from this talk, but I'll try to sum it up as best as I can.

Basically, the idea is that we, as educators or as human beings, need to be authentic and to recognize the things that make us real and unique (which is essentially the sum of our experiences, which is different from person to person) and acknowledge all of those things, rather than try to put on appearances or be something we're not. That's the first step to being relatable.

The next step is to listen to everyone around you, especially those that you've been tasked with supporting in any sort of educational way (students, your own children, other teachers you're working with). But it's not just about listening It's also about asking the right questions. The advice given is to ask questions that are non-judgemental so that when you listen you can listen to learn - and that the person you're speaking with feels that. We don't want children (or adults) to say what they think we want them to say, but we want to actually find something out about them. We can call this humbly listening.

Later, both Tara and Michael talked about the idea of cannonballing. To explain the metaphor quite quickly, cannonballing is something you do that's a new thing. Like jumping into a pool, it's both scary and makes others stand up and take notice. It's not the same thing over and over. They spoke at length about how difficult it can be to cannonball and how you can support people with cannonballing. I think I summed it up quite nicely in the following tweets:

What do you want to do? How will you do it and how can I support you? Let's check back in a couple of weeks - A good way to help someone achieve something #HiveSummit @TaraMartinEDU
— Michael Davidson (@michaelteacher) August 5, 2018

There are times when you have to jump with them, and then later empower them to jump on their own - loving this metaphor of the cannonball! @TaraMartinEDU #HiveSummit
— Michael Davidson (@michaelteacher) August 5, 2018

Another important and vital point that is brought up is that you shouldn't listen to the critics who aren't in the pool with you. No matter what you are trying to do, there will always be those people on the side of the pool - the critics and the dabblers - who are too afraid or proud to get in, but who will tell you all the mistakes you made and try to convince you not to cannonball anymore. Her advice: keep going with what you do, try to make big splashes so they get wet a little bit at a time. Eventually they will get soaked and want to come and join you in the pool. It's all about inspiring people to change, NOT forcing them. I think that's something relevant for everyone, especially myself going into a new role at a school that is due to open next year.

The final part of the talk delved into one of Tara's cannonball ideas: Booksnaps. When trying to understand why her son was always on Snap Chat and other things, she had an idea. She put the picture of the book on a Snap Chat (I think that's how it works, I've never actually used the app myself) and then annotated it with various things. At the time she had two twitter followers but still shared it there. The author commented on what she did, shared it himself and then everything just kind of snowballed from there. This is an amazing example of everything she had just talked about. She had a new idea, she jumped in with it, splashed the right person and now lots and lots of people are doing it - because it's a great idea!

And what's happened now? Thousands of other educators around the globe have started using them and adapting them, modifying them and increasing their utility. A lot of good has come from someone taking what seemed like a small idea and just throwing it out there. Does every idea grow like this? Of course not, but Michael asked a very pertinent question near the end of the talk:

Think about all the ideas we don't cannonball in on? @mrmatera @TaraMartinEDU #HiveSummit A very good point and one we need to share!
— Michael Davidson (@michaelteacher) August 5, 2018

And he's absolutely right! Could you imagine how quickly we would innovate if all of us were sharing our ideas and listening to each others' voices? There is a lot from this talk that can be related to the earlier talk from Michael Cohen. The more we share, the more we can be creative. 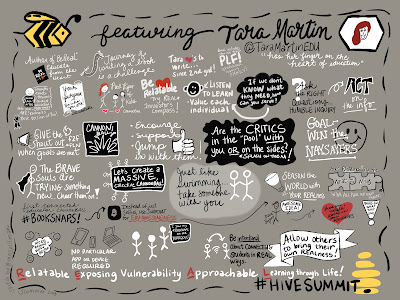