Today I watched the 9th and last video from the Hive Summit. I am a bit saddened that it is over, but I've had a great time (even though it's been very hard to fit them all in - what with New Zealand being in the middle of term and all) and got lots of ideas.

This last video starred Dave Burgess of Teach Like a Pirate Fame where he talked about a variety of amazing ideas that any and all educators can learn from. He first started telling us about how he came to be where he is. A long time ago (or maybe it wasn't all that long ago) he was doing some great things in his class. But not many people knew about it. One day he decided to present at a conference and from there things started snowballing. He shared a lesson that he learned and that lesson is to share. Dave suggests that everyone should take a chance, be brave and present. By doing this, it makes you think and reflect upon what things you're doing that are awesome and amazing (and no doubt, everyone is doing something awesome and amazing). It's a chance to start a conversation and to help improve your own practice. In my experience, you don't need to have a perfectly formed idea to present, all you need is an idea.

Dave then goes on to talk about those ideas. Not every idea that you hear, even if it's a great idea, will be one that you want or need to adopt in your classroom. And that's ok. We are all individuals and all have different ways of doing everything. There is no one right way to do anything and as educators I think we need to embrace that. Learn about a lot of different ideas and then take the best of everything that will work for you. Mix and match. There are so many great ideas out there and so many ways to inspire children. Do what makes you the best educator that you can be. And don't forget to share the things you're doing so that others can take the best bits of what you do. I like how I summed it up in a tweet best:

Teach like you. Take all the amazing ideas and integrate them to be the best you that you can be. But teach like you. @burgessdave #HiveSummit
— Michael Davidson (@michaelteacher) August 13, 2018

He also talked about how often he would go to conferences to present, and how he spent a lot of his own money and time to get out there. That naturally led into a talk about what you can do if you can't afford that or there isn't anything near you. He talked of a ski and snowboarding resort that would sometimes not get snow. But when there was no snow, they didn't just close up shop. They made their own snow. If you don't have access to the community that you need to grow, make your own. Or join one of the myraid of online groups (that's been a pretty big theme throughout all nine videos) and join the community. These groups are not about listening to one person and everyone copying those ideas in the classroom. It's the mix of people that make the PD and the space what it is, not the person in charge. The main point is though, to find a group that works for you.

Some other great advice that was given in the talk was that at the beginning of the year you should spend the first few days on making your classroom or learning space a safe and exciting community. You want to make children so excited on the first day that they can't wait to come back on the second. Most classes (I know I've done this) spend lots of time going over all the minutiae of the rules and regulations but is that what you want children to go home thinking?

He also spoke about putting on a show. Often people get confused and think that you have to be "on the stage" all the time. But that's not what he's advocating. Spend a little bit of time on the show, get the kids hooked in (love the pirate analogy for this) and then have them doing the amazing things that will help them learn: collaborating, connecting and creating. He says, and I completely agree: "We want makers not memorizers; creators not consumers."

I have thoroughly enjoyed this talk and every other Hive Summit talk. I hope that I've managed to help amplify the amazing voices and ideas of those that were sharing. I'll leave you with what Michael Matera left us at the end of the video, because it's such a good message:

Be mindful, be awesome and always be in motion. 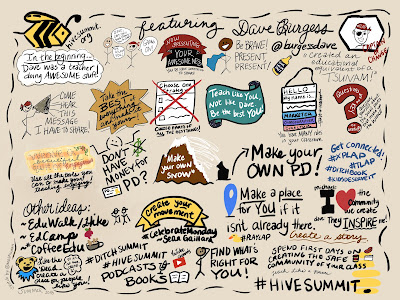