I'm slowly getting to the end of the Hive Summit and I'm continuing to be inspired by the amazing people and amazing topics being discussed. The penultimate video has Joe Sanfelippo discussing ideas around Hacking Leadership, or how to be an effective leader. This topic is (like many of the other topics) near and dear to me. I am taking up one of my first official leadership positions very shortly so I'm looking for ways to help build something amazing.

In a very enthusiastic way (gung ho might be a better word to describe it), Joe tells us about three things that are important for leaders to do: Be intentional, open doors and build staff.

Being intentional is something that leaders, whether you're leading a classroom, team, school or district need to think about. It means that you do things for reasons; that there's always a why to your actions and that why has to do with the results you want to achieve. A lot of this revolves around role modelling, but also includes making choices in when and how you do things. An example he gave was that in Wisconsin, many people would be watching Green Bay Packer games on Sundays. If you want to share on social media, some people would be sharing things at the same time commercials were on for the games - that way when people went to their social media feeds theirs would be the top stories. I think that example is the best because it just shows the cause and effect relationships between actions and desired outcomes. As a leader you need to think like this in order to help accomplish what you want. Be VERY mindful of how to achieve your lofty goals.

Opening doors is the idea that you need to share what you're doing and put yourself out there. This doesn't mean necessarily sharing what an individual is doing, but what the collective team is doing. It's never really about me, or I. It's about we and us. Letting the world know the things that are going on in your school is important to starting and continuing a dialogue.

This can be a very scary idea for many. There is a lot of judgement that occurs, but in order to accelerate our progress we need to share what we've done and what we're doing. There are many different ways to share, and not one is better than the other, though it does change your audience slightly. The point isn't which platform you should share on, but that you should share. Make things visible and transparent.

Building staff is very important. As Joe said in his talk, you need to make people feel like they are a apart of something bigger than themselves, like they are not isolated and like they have control of the direction of whatever organization they are a part of. There's nothing worse if you just go to work (or school) and someone tells you what to do and doesn't let you grow. Joe spoke of something that my new school is in the process of doing, and that's Passion Projects for staff. I can't push that idea any more. It's absolutely brilliant. I've been facilitating projects like this with students for years now, and it only makes sense to allow educators to do the same - but authentically, not based on someone else's ideas.

While watching this, I couldn't help but notice a huge link to the Project Culture Shift ideas that I've been learning about lately as well. The four main areas for that are: Collaboration, Agency, Risk Taking and Curiosity. I think the ideas that Joe spoke about in his talk align completely with this, and since I'm going to be a part of that, his ideas have helped me with some really good ideas and insights.

This was yet another amazing Hive Summit talk. There's only a few more days left to watch the videos so I urge you to do so if you haven't yet. And you're reading this and it's too late, look these people up, read their books, see what they're doing. There's tons of amazing ideas in this! 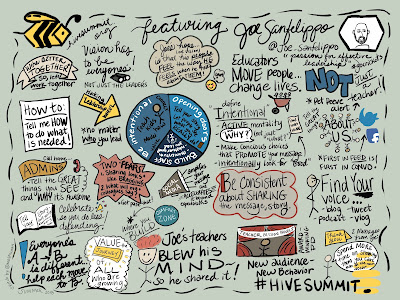