Day three of the Hive Summit brought a very in depth discussion of grading and it's usefulness in the classroom with Rick Wormeli. Being in New Zealand, I do feel like we are slightly further along this journey than most, but Rick made it very obvious that there is still a ways to go - for me at least.

My first little issue though (and maybe this is just the difference in mindset) is that throughout the whole conversation, much of the language used centred around "grades" rather than "assessment." I think that in itself is a big mind shift, that maybe hasn't happened everywhere yet.

Rick opened his talk with a discussion about why grading is not only inaccurate, no helpful but often unethical. Most of us have probably been in a class where we're given quizzes and then tests. Many times these quiz scores are averaged out and then mixed in with the test scores to give a final grade. But the quizzes often test the same things as the tests, and if we're truly trying to measure learning, then why would we include our earlier, less competent versions of our work in our final grade. How is that an accurate assessment of what we've learned. He suggests going to a standards based way of assessing learning - ie are you able to do something or not. Often we get so caught up in trying to come up with a grade or mark (or level, in the case of NZ), we forget what the actual goal is. And sometimes teachers like to play 'Gotcha' or punish children with low grades for low effort.

Another point that was touched on was HOW to make the change towards a better way of assessing children. Though we want to move things forward, they are not things that happen overnight and can be fraught with lots of dangers on the way. The first step though, can be to fulfil the marking requirements of a school or district while still changing things enough so that the students' best interests are in mind. So for example, weighting things differently, or giving a minimum grade (say 50% is the lowest grade possible) so that actual progress or achievement is measured. The second thing is to start volunteering for committees that can make the changes needed. Stand up and be heard. A third thing to remember, is that if it comes down to causing political problems versus serving the students, you will have a tough choice. Rick says that his students' needs will win every time, and I applaud that.

As educators we need to focus on the positive, rather than counting errors and adding them up. What can a child do, and what do they need to learn how to do next? What could they improve upon and how can they do so? We need to help set goals alongside our learners and then celebrate when they achieve them.

In the end, with most things, it comes down to being a reflective practitioner. It means going out there, hearing different voices, seeing what people are trying, reflecting on what you're doing and why you're doing it. Ultimately we can only control what we do, so confronting others about their practice and backing them into a corner is no way to foster systemic change - in only creates resentment. Change is difficult and often it involves us feeling as if we've lost a part of ourselves. That's natural. But it doesn't mean that we should continue to do things that have negative consequences just so that we can feel good about ourselves and previous choices.

I probably have not done a very good job of summarizing this talk, so I suggest you go watch it yourself. There is great advice for everyone in there, no matter how far along you are in your journey to create authentic, accurate and useful assessment. 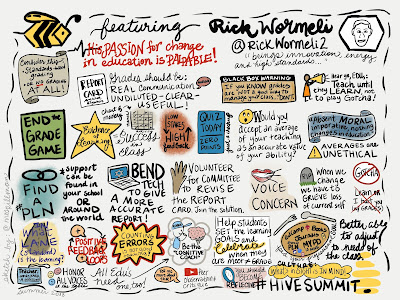